John 3:16 is probably the best known verse in the Bible.  Lots of children have memorized it in Sunday School, perhaps because it sums up the whole gospel so succinctly.

God loved the world so much that in order to redeem the world, He allowed His only son to die as a sacrifice for us.  That kind of love is hard to fathom.  And it was for the whole world.  When Jesus spoke these words, the people of the time thought that the Messiah was coming only for the Jewish people, and that the Gentiles would be condemned.  They expected judgement, but John 3:17 clarifies for us that Jesus did not come to condemn us, but to save us. All we have to do is believe in Him.  It is our choice.  The creator of the universe could choose to make us do whatever He wants us to, but He doesn’t.  He loves us so much that He lets us do whatever we want.  When we do choose to believe in Him though, we are rewarded with eternal life.  The Greek word used here for life represents not only life after death, but life here and now, and it represents the quality of life as much as the quantity—the more abundant life that John 10:10 describes.

I think this sounds like a great offer.  There is no need to perish.  The gift of life has been given; all we need to do is accept.  Why is it that there are people who don’t want to accept?  Fear, maybe?  Fear of losing control of their own lives?  Ironic when you think about it because God has given us so much freedom.  (II Corinthians 3:17, Galatians 5:13-14)

I chose this verse for today because I think of it as a Valentine verse.  I will share the Valentine with you here just in case you have never received it in an e-mail.  Happy Valentines Day everyone! 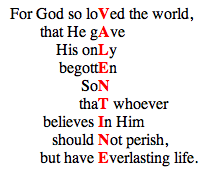 I think that John 12:8 is sometimes misinterpreted and used as an excuse not to help the poor.  This, however, is not in keeping with the rest of scripture.  John 12:1-7 tells the story of Mary pouring very expensive perfume on Jesus’ feet.  Judas who would later betray Jesus asked why this perfume wasn’t sold and the money given to the poor.  Verse 8 is Jesus’ answer to Judas:  You will always have the poor; you won’t always have Me.  Jesus would have seen Judas’ insincerity and ulterior motive, just as John evidently did.  His response needs to be taken in light of the context.  We know that Jesus cared about the poor.  His answer to a young man who wanted to know what more he could do besides keeping all the commandments was to give to the poor.  (Matthew 19:21)

Was this use of perfume a waste as Judas suggested?  Again, Jesus could see Mary’s heart.  He knew that she was honouring Him by anointing Him in this way.  She did what she knew how to do.  She knew that He would not be with them much longer so she gave what she had of value and worshipped her Lord with it.   Worshipping the Lord and giving to the poor are not mutually exclusive; we should do both. (Luke 10:27)

I heard an interview recently with Arloa Sutter, Executive Director of Breakthrough Urban Ministries www.breakthrough.org and author of The Invisible. She believes that Jesus may have been quoting from Deuteronomy 15.  In Deuteronomy 15:4-5, we read that the Lord would bless the people if they would only obey His commandments—the ones referred to in Deuteronomy 15:1-3 regarding the cancellation of debts every seven years.  In Deuteronomy 15:11 the Israelites were commanded to make sure that they opened their hand to the poor and needy in the land.  We must do the same, but not grudgingly, and not only in view of the blessing we will receive, for the Lord loves a cheerful giver.  (II Corinthians 9:7)

Did Jesus mean to say that we don’t need to help the poor?  Certainly not.  Arloa Sutter said, “Jesus might be saying love them extravagantly.  I’m not going to always be here, but the poor you’ll always have.  So love them, because when you love them you’re loving me, and do it with extravagance.  Don’t hold back.”  Now that Jesus is not on Earth in the flesh, the way we honour Him includes what we do for others.  Whatever you do for the least of these, He said, you do for me.  (Matthew 25:34-40)

Today’s verse continues the theme in my last post (January 5, 2011) from John 1:1, where we learned that Jesus was referred to as the Word.  After John 1:14, John no longer uses the term Word to refer to Christ, perhaps because this is where John tells us that Christ became a man and took up residence on earth.  This is an incredible thought.  Think about it.  What in this plan could be of benefit to Jesus?  He gave up every good thing to come to earth, not to live in a palace with all the blessings of great riches, but to live the life of a nomad, one who was pursued by both the most needy people and the self-righteous haters of the day.  The term that is here translated as  “took up residence” comes from a Greek term that means to pitch a tent.  He left heaven to live in very lowly conditions for us.  He did this because He loved us.  He did this because He knew it was part of the bigger plan, the one that the Father has to redeem us.

So, there was Jesus, the only Son of the Father, living among the people.  The Message paraphrase of this passage says that He “moved into the neighbourhood”.  How would that change your life if Jesus moved in next door?  What if he moved in to your spare room, and joined you at your dinner table, or more significantly on your sofa as you watched TV?  Would you do things differently?  Many people of that time didn’t recognize Him as God, just as many people today don’t.  But He is still here with us today, no longer in flesh but in Spirit.  He is there with you at your dinner table, while you watch TV, while you surf the Internet.  And He still loves us just as much as He did when He put on flesh to walk among us.  Amazing!

Jesus is referred to as the only Son of God, unique because He is in fact God.  When we receive His gift of grace, we also become children of God.  (John 1:12)  We are adopted into the family.  God the Father has just as much love for us as He does for Jesus.  Because of Jesus, John and others of his day were able to see God’s glory, His grace and truth.  Jesus was the personal revelation of God.  He still is today.  He still represents the goodness and love and light and life of our Heavenly Father.

When I was young I had trouble understanding John 1:1.  I didn’t really get what word was with God.  Finally I figured out that “Word” represents Christ.  It makes so much more sense now.  Christ has been with God since the beginning; He is with God, equal to God, and is in fact God.  It is interesting that this verse begins in the same way as the account of creation, but Genesis 1:1 goes forward from that point and tells us of creation.  John 1:1 goes back from that point and tells us that Christ existed with God before God created the universe.  Ah, but you might say, “Wait a minute!  Didn’t Christ come as a baby, born in Bethlehem, in a manger?  Isn’t that what Christmas is all about?”  Well, yes, but that is exactly what helps us to figure out the “word” part.  Why did John call Christ the “Word”?  Christ is God’s representation of Himself to humanity.  Christ is how God chose to reveal Himself to us.  Christ came not only to redeem us and bring us salvation, but He came to show us the Father and how much He loves us.  So God has given us His word in two ways—through His son, and through the words of the Holy Scriptures.  The latter will help us to know the former, and both will help us to know the Father for Jesus says in John 10:30, “The Father and I are one.”  That’s all the more reason for us to look at Memos From God together.