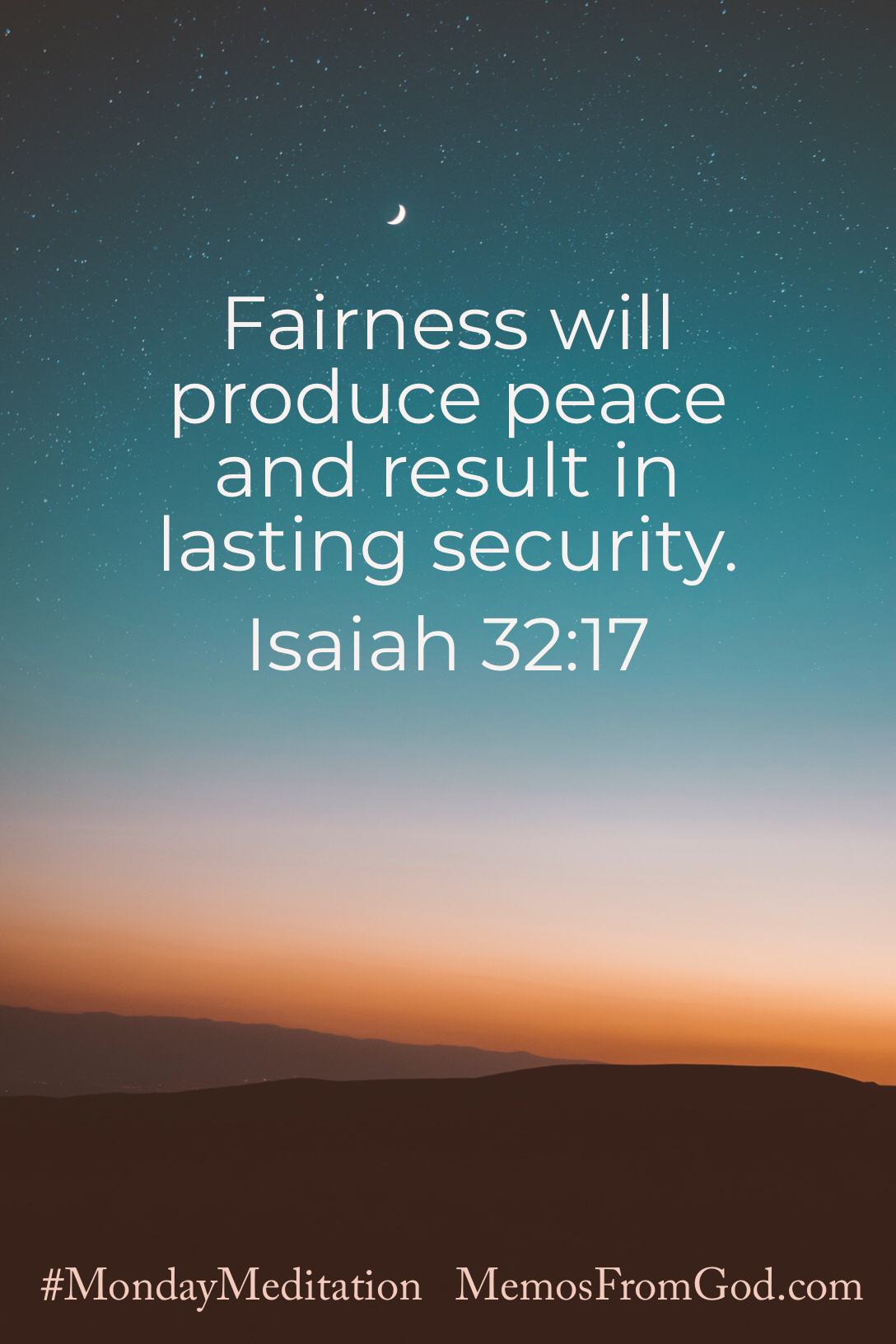 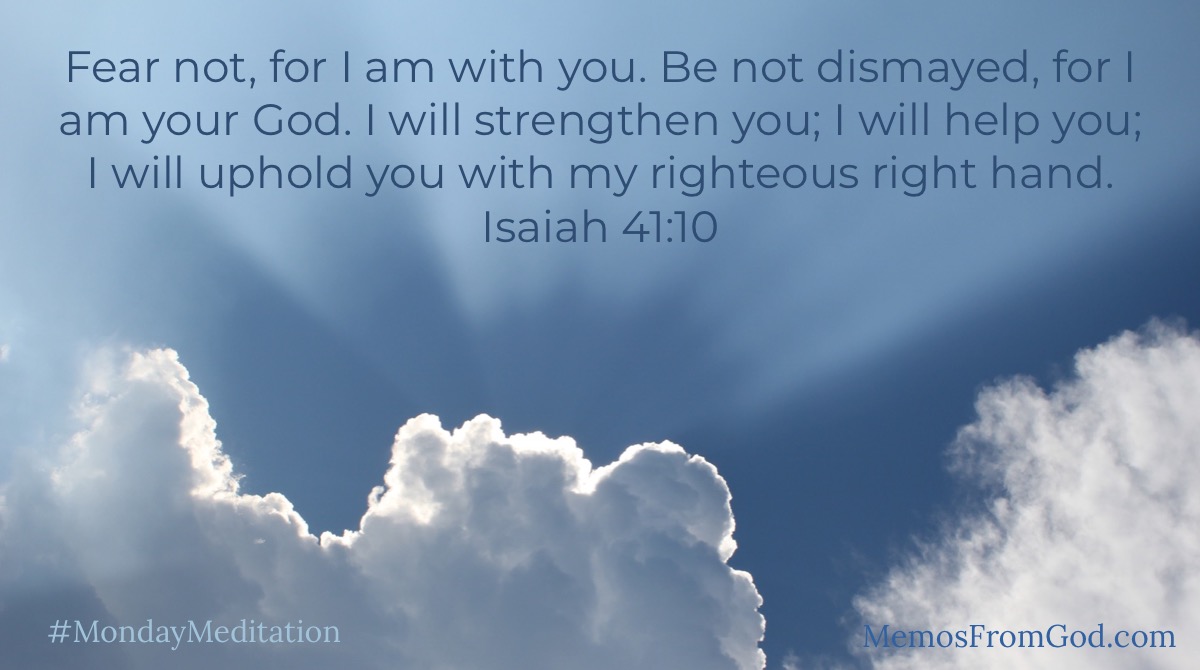 We all have at least one thing in common: we are facing an uncertain future. We may think that we have the course of our lives planned out, but we never know what might happen to change those plans. Sometimes, the evening news makes that all the more real. It might be a natural disaster, an accident, or the result of the evil acts of mankind, but there is always something happening that will put boulders in our path. This will be especially true if the path we are following is not God’s path.

The Israelites experienced this regularly; one specific example is their exile to Babylon. They spent 70 years there! I can tell you that I would feel forgotten by God long before that. But the Israelites were not forgotten and neither are we. In Isaiah 41:10, the Israelites are returning from exile and facing the prospect of starting over amid other nations. God tells the Israelites that they need not be afraid. He is with them; He is their God. It’s always nice to have a companion to help you face the tough times, but so much better when your companion is the all-powerful God of the universe. God promises to strengthen them, help them and uphold them with His righteous right hand. Righteous. That means that he notices when we disobey. The Israelites constantly disobeyed and God had done something about it. God had told the Israelites in Jeremiah 29:10 that they would be subject to Babylonian rule, and that He would get back to them in 70 years. But take note: that is the verse that comes right before the popular and well-loved verse of Jeremiah 29:11. I know the plans I have for you, declares the Lord, plans to give you a hope and a future. The following verses (Jeremiah 29:12-13) assure them, and us, that God will hear our prayers and will be available to us when we seek Him with all our hearts.

Sometimes the challenge of this life seems like it is far too much to handle, and it probably is unless we have God’s help. He wants us to depend on Him, to trust Him to see us through the trials we face. He assures us over and over again in His Word that He is strong enough, He is able and He is willing. We need not fear; we just need to come to Him.

Have you ever felt like you wanted to move forward, but every time you take a step you run into a brick wall? So you take a step in another direction, and there is another brick wall. You are surrounded by mile high brick walls everywhere you turn. That’s the way I’ve felt lately. It’s frustrating and discouraging. Sometimes I feel hopeless.

Because of a car accident I was in a couple of years ago, I function at a much lower level than I used to. There are things that I want to do, but I just can’t. One of the few things I didn’t have to give up on was book club—truly one of the greatest blessings in my life. On Monday, we had our annual Christmas brunch. As has become a bit of a tradition, our leader read a story while we passed around a gift according to directions given in the story. The gift would be given to the person who was holding it when the story ended. This year, that person was me. Among other fun, unique and beautiful things was a fairly large box. When I opened it and pulled out the first tissue wrapped item, I quickly realized that the contents were letters spelling the word HOPE. They are designed to hold candles and could be used as a centerpiece on a table or buffet. But for me, the beauty of this gift was the much-needed reminder from God that I could have hope.

Only a few hours later, I came across Isaiah 41:10. "Fear not, for I am with you; be not dismayed, for I am your God. I will strengthen you, yes, I will help you, I will uphold you with My righteous right hand." These are words that God said to the Israelites, a people who weren’t sure if they could have hope. They had disappointed God with their rebellion and had been exiled because of it. How could they know that God had not given up on them? How could they be sure that God would not punish them further? The word God gave to reassure them also reassures us. If we are children of God, He is with us, He will strengthen and help us. He will uphold us because He is righteous. The whole reason for Christmas is that God sent Jesus to be God with us. Emmanuel. (Matthew 1:23) Through Jesus, God is keeping for us the same promise that He made to the Israelites in Isaiah 41:10. No matter what we are facing, we can turn to Him and find hope.

Today's post was written by Robert Driskell.
---------
Christians are often accused of wanting to force their beliefs on others, of wanting to make America a theocracy. A theocracy is defined by Webster as the, "government of a state by immediate divine guidance or by officials who are regarded as divinely guided".

Many Christians are rightly accused of trying to get the laws of the Old Testament installed as the law in America. These Christians recognize that the world would be a much better place if everyone lived according to the standards that God has given us. After all, He designed and created the universe; shouldn't He know best how it should work?

The problem is that there are many who think they know better than God how things should go. These people reject God and His plan for humanity. Nevertheless, there are some Christians who seek to force these non-believers to live according to God's plan, even if it's against their will. This is where the conflict reveals itself.

While living in a theocratic nation would make things appear better outwardly, it would only be a façade, an alteration of public behavior. Man's inner self would still be the same rebellious, sinful entity it ever was; it would just be better hidden. It is not merely the outward behavior of a person that needs to be changed, but the inward condition of the heart. When people are forced to obey laws, there exists within them an underlying spirit of rebellion just waiting for the opportunity to manifest itself. Ravi Zacharias writes that:
"All the rules in the world cannot change a heart or make a person righteous. Only as the spirit is touched by the Spirit of God does the soul rise in worship and true goodness flow." (Deliver Us From Evil, Ravi Zacharias, Thomas Nelson, 1997, p. 208)

We have also been provided a clear biblical example of the ineffectiveness of theocratic rule. The Old Testament record is full of instances of God's rule being spurned by His people. These same people who had received God's protection, deliverance, and presence turned to their own ways on several occasions.

The Bible makes clear that salvation does not come by observing rules and regulations (Romans 3:20-31; Galatians; etc). God's laws were given to mankind to show that His standards are too pure for us to consistently live by. They were to show us that we can't be good enough for God. They were given so that we would eventually come to the end of ourselves and acknowledge our desperate need for His grace. The ultimate example of His love and grace came in the person of Jesus Christ.
"Jesus gets to the heart--not to a set of rules that can be observed while the heart still rebels." (Deliver Us From Evil, Ravi Zacharias, Thomas Nelson, 1997, p. 208)

The Christian wants to spread the love, forgiveness, and fulfillment that can only be found in a relationship with Jesus Christ. They desire to see others moved by the love of God and, out of gratitude for what He's done for us, willingly seek to honor and obey Him.

When a person's heart is healed, their actions reflect that healing. This is how a society changes in the hearts of its people.

We should not want to force our beliefs on anyone. Love can't be forced.

Seek the LORD while He may be found; Call upon Him while He is near. (Isaiah 55:6 NASB)