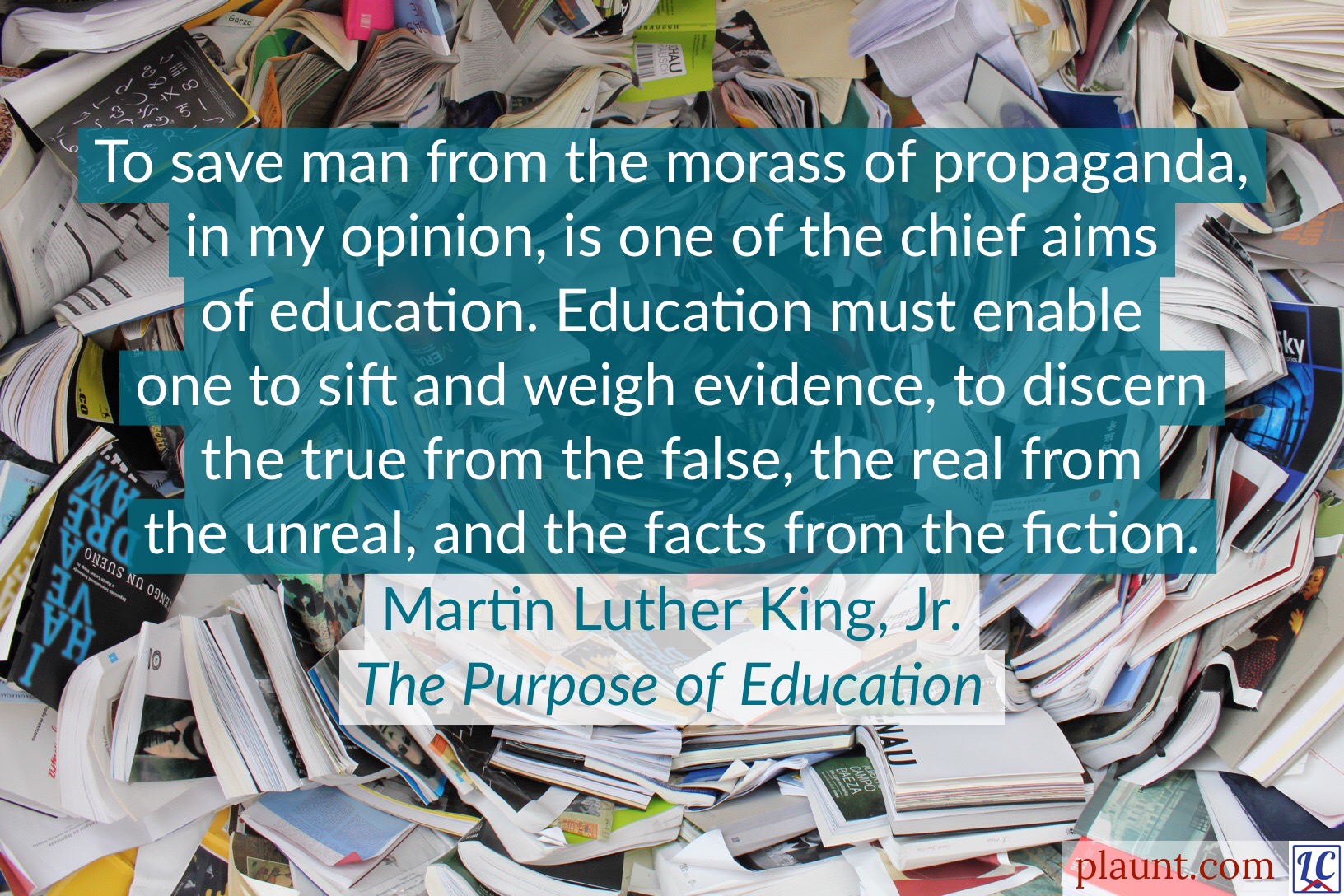 In lieu of #MondayMeditation today, and in honour of Martin Luther King Jr., I have chosen to share this wisdom from him.

Especially now, when information is so easily distributed, it is important not to accept everything you hear or read as truth without checking the facts.

To discover the truth about God, spend time studying the Bible.

Martin Luther King Jr. had a dream. A dream where people of all backgrounds would be considered equal despite the colour of their skin. He gave his famous “I have a dream” speech 50 years ago today. The “I have a dream” segment is the best remembered and most quoted part of his speech, despite the fact that there was no reference to it in his written draft. Having been advised against including it because he had used that material before and it was cliché, he chose not to include it. So when he changed his mind in the middle of his speech, that section had to be completely ad-libbed.

Although I’m sure Mr. King would be pleased to see that our society has made some progress since then, I don’t think he would yet be satisfied. Fifty years ago he said, “No, we are not satisfied, and we will not be satisfied until justice rolls down like waters and righteousness like a mighty stream.” I think he would still have a dream, a dream for true freedom. Mr. King elaborated on what his vision of freedom looked like. His vision included unity and justice, safety from violence, and relief from oppression. He also dreamed that one day “the glory of the Lord shall be revealed, and all flesh shall see it together”. This was his hope and the faith that he would take back home with him to face the challenges which would continue or perhaps even be intensified after this one day demonstration of solidarity at the nation’s Capitol.

I think it is unlikely that we will ever see everyone living in the freedom that Mr. King envisioned. That certainly doesn’t mean that we shouldn’t strive for it, but I believe that the only true freedom is eternal freedom, and it is only available through Jesus. I have discussed in previous posts (July 4, 2011, March 2, 2012) that when Jesus said, “You will know the truth, and the truth will set you free” (John 8:32), the truth He was referring to was Himself. In John 8:36, we are given further assurance. If we accept the truth offered in Jesus we shall be really free, truly free. That doesn’t mean that we will be above the law of the land (I Peter 2:13), but that we will be free from the bondage to sin. Free from the eternal penalty we deserve because of sin. Free from the need to find approval in the ever-changing beliefs of society. Free from the fear of death. Yes, we should make our time on Earth the best we can, upholding justice, helping our neighbours, and sharing God’s love. But we should also focus on eternity. Eternal freedom comes through Jesus, and we can have it starting right now.

Today, my American readers are remembering Martin Luther King Jr., a man who stood  for equality, peace and freedom.  It has become a tradition to honour Dr. King on this date by performing an act of service.  The website at http://mlkday.gov/ invites you to share your story of how you helped others or served your community today, and also “challenges us to make service a part of our lives – every day of the year”.   They would like you to continue to honour Dr. King, and celebrate the 25th anniversary of this holiday by pledging to perform 25 acts of service this year.  That averages out to just over two kindnesses per month.  It doesn’t sound like that much really, does it?  Unfortunately, when we get into our busy routines and hectic schedules, we tend to focus only on our own desires.  We want to work to meet our own goals, and we leave the downtrodden to fend for themselves.

Have I got good news for you!  Proverbs 28:27 tells us that those who give to the poor will be blessed.  It is a common theme in Proverbs and throughout the Bible to give to the poor, but here the command is stated with a blessing.  If we give we will not lack.  That means that if we ourselves aren’t very well off, giving will not impoverish us.  God will find a way to bless us and give to us.  I’ve often heard it said that you can’t outgive God.

Those who have much really have no excuses.  You have already been blessed, and would not suffer for giving some of your wealth away.  The blessing still applies to you though, for those who give generously will be generously rewarded.  (II Corinthians 9:6)  There is another side to this blessing though.  Those who don’t give, will not only not be blessed, but they will receive many curses.  That is quite a serious statement, one that should be given sincere consideration by each of us.

We are all God’s children, and He doesn’t want to see any of us suffer.  We need to care for our brothers and sisters and trust in our Heavenly Father to provide for our needs.  We who act as His hands and feet to bless others will ourselves be blessed.  What can you do to help someone today?