Today’s post was written by and used with permission from Rusty Wright
---------
I cannot imagine perceiving my father as a monster.

Bart Millard saw his father as a monster and more.

My dad was warm, gracious, fun, affirming, friendly, professional, caring. A loving husband. By example and precept he inspired me to aim high in life, school, work, and relationships. As a boy, I loved playing catch with him, shooting baskets, attending football games, hanging out. Throughout life, when I failed, he was there to console me, to help me pick up the pieces and move on in a positive direction.

Bart’s dad, Arthur, was any kid’s worst nightmare. Anger and rage consumed him often and drove Bart’s mother away. Bart often felt the leather strap and paddle. “As I became a mischievous toddler,” he recalls, “my spankings slowly escalated from normal discipline to verbal and physical abuse.” Arthur once smashed a dinner plate over Bart’s head. Eventually physical abuse morphed into silence and indifference.

I Can Only Imagine could be a depressing movie and book if the story ended there. But the tale behind the popular song of the same name by the band MercyMe could inspire anyone whose life has seemed a hopeless highway to hell. The cast includes Dennis Quaid, Oscar-winner Cloris Leachman, singer Trace Adkins, author/actress Priscilla Shirer, and Broadway singer J. Michael Finley.

Bart is careful to explain some factors beyond his dad’s control that contributed to poor character development. Arthur’s own father’s divorce and quick remarriage had thrust ten-year-old Arthur into head-of-household responsibilities far too early, sowing seeds of anger and bitterness.

Arthur became a well-liked local high school football star in Texas, but later dropped off the SMU football team to care for things at home, sacrificing a possible NFL career. “Dreams” were worthless; “reality” was what counted. He made sure his son knew that “Dreams don’t pay the bills.”

A horrible on-the-job traffic accident put Arthur in a coma for eight weeks. After that, his temperament seemed skewed, and rage filled their home.

Young Bart found escape from family strife and loneliness in music and friends, often through his church youth group. Inspirational music lifted his spirits. The group leader and members helped instill stability and faith. During a camp session, Bart placed his trust in Jesus. But he couldn’t forgive his dad.

The film and book depict with grace, tenderness, and beauty what became of this prodigal father and his unforgiving son. I won’t spoil the story for you, but suffice it to say that the path to redemption and restoration was pretty amazing. In his book, Bart affirms his belief that “God transformed the monster I hated into the man I wanted to become. …From an abusive dad to a loving father. From a heart of stone to a life of grace.”

“I Can Only Imagine” – Bart’s tribute song for his father, performed with MercyMe – eventually became a smash hit on Christian media. Then a mainstream FM radio DJ with a reputation for sometimes crude dialogue played it as a joke for his listeners. Phone lines lit up. People wanted “to talk about what the words meant to them and how it made them feel.”

The DJ invited the band to be on his show and the song’s popularity spread among mainstream stations. MercyMe appeared on Ryan Seacrest’s radio show and on The Tonight Show with Jay Leno, and now has performed at Radio City Music Hall, The Today Show, CBS This Morning, CNN and ABC News.

Paul, an early follower of Jesus, wrote of his Lord’s ability “to do immeasurably more than all we ask or imagine.” Getting Bart to forgive his dad falls into that category. This film is well worth seeing, contemplating, and applying.

Rated PG (USA) “for thematic elements including some violence.”

I Can Only Imagine Official Page USA

I Can Only Imagine Official Page Canada

Rusty Wright is an author and lecturer who has spoken on six continents. He holds Bachelor of Science (psychology) and Master of Theology degrees from Duke and Oxford universities, respectively. www.RustyWright.com 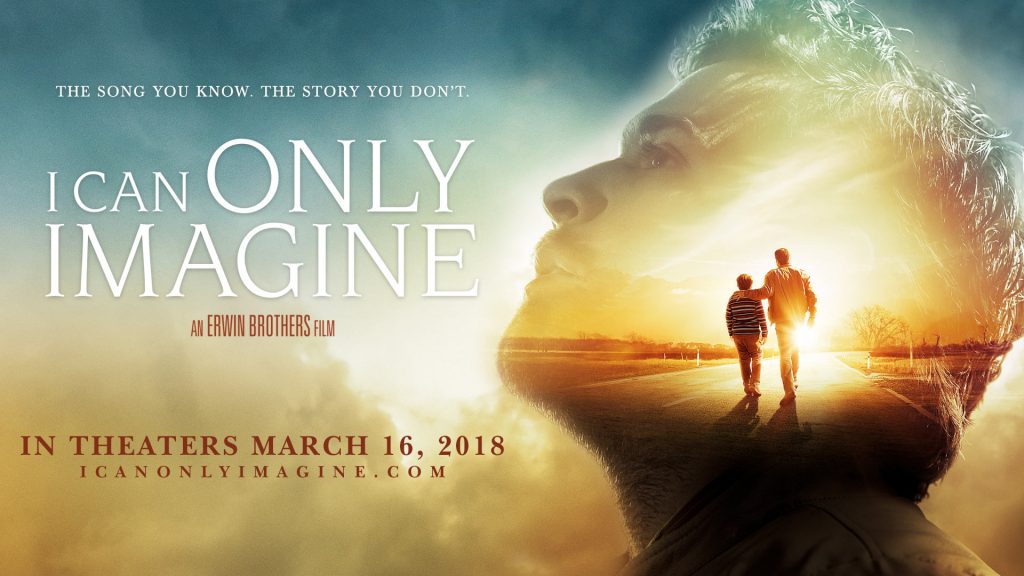